You Can't Always Get What You Want

Here’s some interesting news that you’ll want to shimmy up to the edge of your seat for:

The Audiophile allowed me to make an important decision as it related to room treatment.

I call the treated room my living room and The Audiophile calls it his Listening Room, but let’s not split hairs over semantics. Let’s just say the wall above the fireplace in my living room was empty and begging for an original piece of art. The Audiophile, on the other hand, viewed that space as the primary reason the “room was getting in the way of the music.” He wanted a panel—make that a whole bunch of them, like 16 of those things that look sort of like pizza boxes if someone had spray painted the boxes and carefully cut slits into them so the pizzas could breathe while performing their acoustic duties.

Let me say there is nothing wrong with the pizza-box solution if you are a grown-up man living alone with a lot of macaroni and cheese in your pantry to tide you over between pizzas. In fact, I am confident The Audiophile is coveting your lifestyle and would gladly auction me off on Audiothong if he could get the buyer to pay for shipping.

Long story short, I went to Etsy and pecked in the phrase “diffusing panel” NOT “absorbing panel” because the difference between the two is akin to the difference between women’s panties and men’s boxer shorts or something equally uncomfortable. Anyway, as you can see, I found and ordered a lovely solution that did not require pizzas, paint, or further discussion about undergarments, and we lived happily ever after. 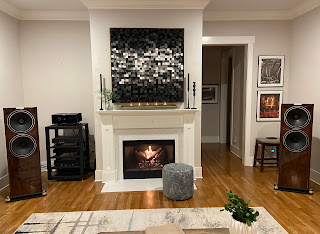 P.S. Thank you, Rebel Sky Acoustics, for the beautiful piece of original art.

Against my better judgement, I went away for a few days. Approximately six seconds after my departure, a second audiophile arrived at my house. I did not check the perimeter cameras to find out for sure, but I assume there was at least one fist bump regarding the complete absence of this Wife and her Acceptance Factor.

Now, as it is written, where two or more audiophiles are gathered together, there is God or at least something hallowed. Maybe an amplifier will be shot out. Maybe a cable will be twisted into a hammock. Or maybe the speakers will be moved by an eighth of an inch to achieve a level of fidelity on par with the acoustics in the uppermost echelons of the heavenly realms.

The day following this divinely inspired playdate, I phoned home, and The Audiophile answered with, “I’ve got a surprise for you, and you are going to like it.”

Let’s fast forward to the day of my return, shall we?

I suspected fine chocolates were not going to be part of the equation but imagine my surprise when I walked in and learned each of the speakers had been moved apart by three feet. For those of you outside of the United States, your base ten equivalent to achieve the same dramatic effect would be ten feet.

Our soundstage now spans the entire width of our living area, which means I get to do a saucy little tango with one of the speakers every time I pass through. Fabulous, I say, because those ballroom dance lessons I forced upon The Audiophile a few years ago are finally being put to use. By one of us, anyway.

P.S. Wine pairs perfectly with high fidelity. Click here to join me in this truth. (You and I will both enjoy $50 off.)

Paradise By The Dashboard Light

Not long ago, The Audiophile wanted to take a drive. Sure, I thought, we’re at the stage of life where a Sunday afternoon drive is just what the gerontologist ordered. Thirty minutes later, we pulled up in front of The Candy Man’s house, which meant our nonchalant drive in the country was actually premeditated entrapment.

In case you have not been following along, The Candy Man deals in chocolate-covered audio rainbows with sprinkles. And nougat, if you’re into that kind of thing.

Front and center, in his audio emporium, on conspicuous display, was a Ferrari-red integrated amplifier that was four wheels short of becoming its own mode of transportation. Now, when I say this thing was Ferrari-red, I mean its naked chassis had tootled over to Maranello, Italy where it shimmied onto the conveyor line between a pair of equally naked supercars. On the count of three, everyone held their breath and waited for it to rain Rosso Corsa.

Apparently, there is a market for this sort of crazy, and I was beginning to wonder if The Audiophile had finally crossed over to being certifiably insane when he signaled for me to write a check to… purchase a set of cables sheathed in a completely normal shade of normal.

Obviously, this was a classic psychological half-nelson transaction because I would have bought just about anything to steer clear of owning an amplifier that shouted, “Hey there, hot mama,” every time I made an omelet or steamed some broccoli.

Let Me Entertain You

What you have here is a PSA—not the screening test for gentlemen—but the one that has to do with an announcement, to the public, about a thing. In this case the thing is AXPONA. It is called AXPONA because the founder was under the influence of something when he named this event and thought that was a melodic-sounding palindrome. Turns out it’s not very melodic and… nope… it’s not a palindrome.

I’m all for walking the XPO, which is usually spelled EXPO, but at this event the E is silent and invisible. The point, however, is I’m only able to generate authentic audio adrenaline for limited periods of time before my face starts to convey the fact that my mind is purchasing a ticket to the Get Me Out of Here resort and spa.

Here's the problem, if you visit the AXPONA website, you will notice there is not a banner or a tab or a button with a listing of the spouse outings because there aren’t any. Sure, there’s the customary mall nearby and a do-not-miss exhibit on the History of Anesthesia at the Wood Library, but you’re basically on your own to figure this stuff out.

I’m half-heartedly working to see if I can remedy this situation with the AXPONA organizers, but if nothing else you’ll find me in a corner somewhere with my Mah Jongg tiles wistfully looking for three other players. We’ll start by dumpster diving for a three-legged card table since all the four-legged tables will be smugly displaying audio merch in the XPO hall. After that, who knows what will happen, maybe we’ll get tattoos or put together a list of palindromes to describe audiophiles—anything is possible, really.