Have a Yabba Dabba Doo Time

What you see here is The Audiophile. Look closely. I know I did. 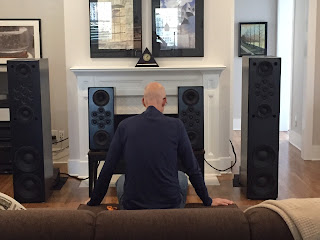 To the untrained eye, it would appear Barney and Fred slipped out of the house one night for some alone time with their womenfolk, and the next thing you know, Pebbles and Bamm-Bamm were born. Alas, that is not what happened.

Barney and Fred lived with us for several months. They were so named because they were as unattractive to me as their animated body doubles. For the record, I am not physically attracted to cartoon characters, but if I were I’d like to think I could do better.

Pebbles and Bamm-Bamm came to us from another audiophile who didn’t want to risk his eyebrows tearing them apart, rifling around with their intestines, and putting them back together again. Fortunately, nothing makes The Audiophile happier than risking every last hair on his head in the pursuit of Grand Poobah fidelity.

To his credit, all the characters shown in the photo sounded beautifully three dimensional when he was finished playing OPERATION with them, and that meant they were listed for sale faster than you could say WILMAAAA.